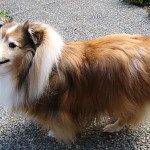 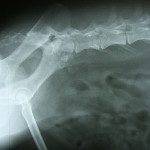 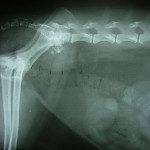 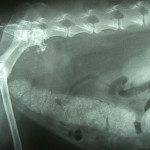 History:
6/18/2004 - Solomon initially presented for non-weight bearing lameness of the left rear leg. Due to the severity of the pain a neurological consult was scheduled.

Diagnostics:
6/18/2004 - An MRI revealed a mass measuring 4cm on the left side of the spine extending from the caudal aspect of L6 to the lumbosacral disk space. The mass occupied approximately 1/3 of the vertebral body of L7. The primary bulk of the mass was located in the sacroiliac space. The mass extended through the vertebral foramen at L7-S1 and into the spinal canal.
A biopsy on revealed a grade I chondrosarcoma.

Therapy:
7/12/2004 - Solomon was prescribed a high dose of Veterinary Immune Tabs as an adjunct to radiation therapy. The oncologist estimated survival at less than 1 year with radiation therapy that he received. Three years from the initial presentation of symptoms Solomon was doing great and continued to enjoy a high quality of life.

11/27/2007 - Unfortunately, Solomon was euthanized due to the size of the tumor. Although the treatment protocol was not able to reverse the tumor growth it appears that Vet-I-Tabs may have aided in extending the patient’s life expectancy and maintaining a high quality of life during the final stages of the disease.