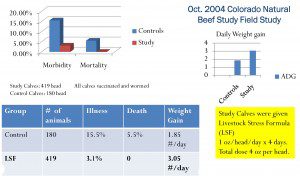 A study was conducted on Black Angus steers shipped from Oregon to Greeley, Colorado. Study calves (419 head) were given Ramaekers Stocker/Adult Immune Primer by bolus on day 1then blended with the feed on days 2,3 and 12. Control calves (180 head) were given a placebo on an identical schedule. Both groups received the same vaccines and worming.

Weights, illness and deaths were tracked for 30 days. The results revealed a 1.2 pounds per day advantage for the treated calves in addition to a 66% reduction in illness. The control group experienced 12 deaths due to Bovine Respiratory Disease compared with 0 deaths in the cattle treated with Ramaekers Immune Primer Formula.

Follow up: Immediately following the study period all cattle were back-grounded on corn stalks for approximately 6 weeks. During this time the control group seemed to catch up with the treated group in body weights BUT after being placed on full rations the treated group finished with an estimated 70 pounds of extra gross weight.