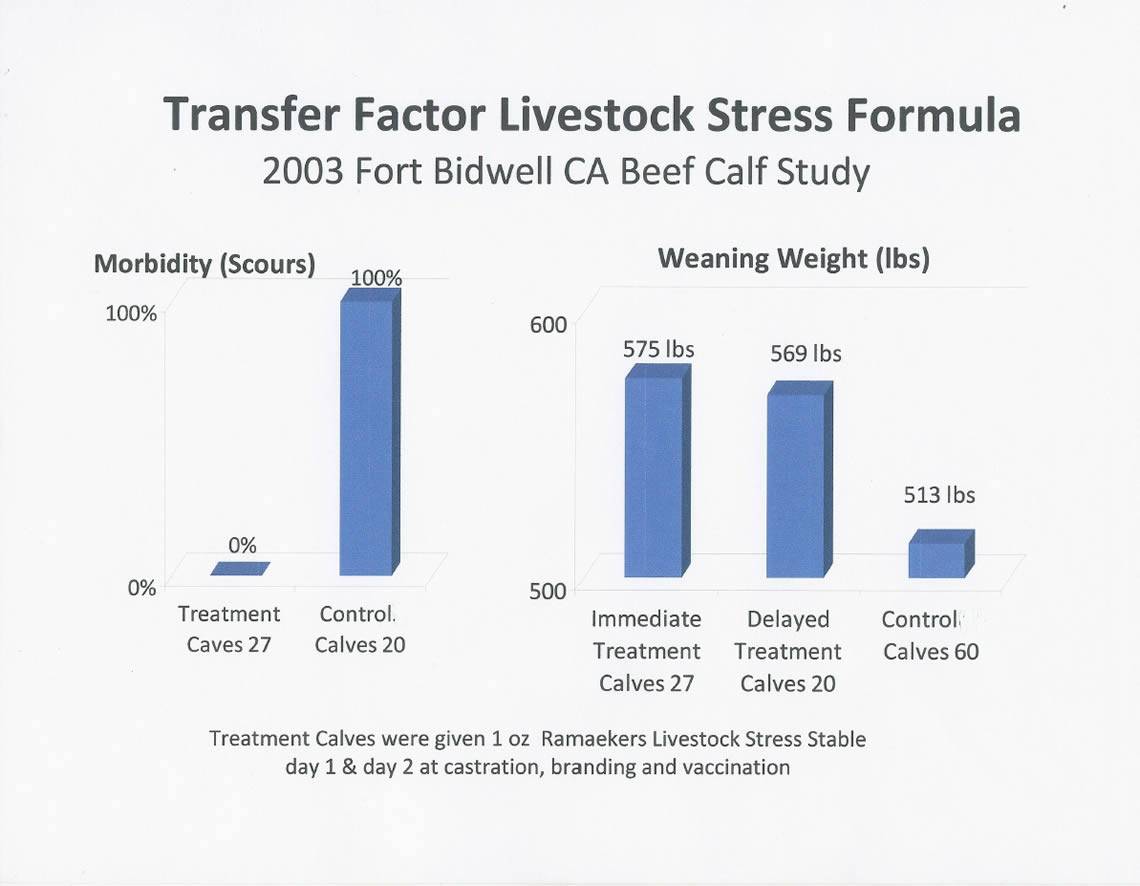 HISTORY: The Fort Bidwell region encompasses the north-eastern corner of California and adjacent areas of Oregon and Nevada. Ranching in the Fort Bidwell area is comprised mainly of private ranches that utilize Bureau of Land Management ranges for grazing of beef cattle.

Severe annual calf illness( up to 100% scours) and death (up to 37%) had been observed annually from 1990 to 2001 in a 1200 head cow-calf operation. Years of treating with numerous antibiotics in several combinations proved unsuccessful. The ranchers also had worked repeatedly with U. C. Davis College of Veterinary Medicine and Washington State College of Veterinary Medicine in an attempt to ascertain the source of the severe scours that plagued the area. An autogenous bacterin had been developed from the highly resistant strain of enterohemmorhagic E. Coli isolated from local cattle. The effectiveness of this vaccine diminished overtime.

During times of rain, temperature fluctuations, cold stress and difficult calving the incidence of scour would skyrocket.

THE STUDY: In January of 2002, fifty cows were assigned to the calving study. At birth the calves were ear-tagged and randomly assigned to the Treatment group and Control group.

At birth the twenty-seven calves in the treatment group received a dose of Ramaekers NEWBORN IMMUNE PRIMER on day 1 and 2. The twenty calves in the untreated group served as controls.

At 2 to 3 months of age, all calves were branded, vaccinated and the bull calves were castrated. The Treatment group received another dose of IMMUNE PRIMER while the Control group received nothing. All of the study calves with their dams were mixed with other cows-with-calves and cows still due from multiple herds and were turned out onto BLM land around April 15th.

After grazing for 5 months, all the calves were returned to local ranchland for weaning, vaccines and the Treatment group received one more dose of STOCKER/ADULT IMMUNE PRIMER.

RESULTS & DISCUSSION: Within the first week of life 100% of the Control calves developed scours. NONE of the Treatment group experienced any signs of scours.

A neighboring herd with similar genetics, herd management, calving times, branding & vaccinating schedule were now designated as the Control Herd. The only difference being that the Control herd calved in a higher altitude, drier climate than the treatment herd and did not receive the Ramaekers IMMUNE PRIMER formulas .

All the ranchers noted that the Treated calves were easily identifiable with an estimated 5% to 7% heavier body weight and all had a more vibrant coat compared to the untreated calves.

The calves were hay-fed for 25 days after weaning then sold. Combined Group weight averages are as follows: