History:
8/5/2002 - Cleo presented with firm swelling of the left front leg. Radiographs revealed a destructive bone lesion. The local radiologist suggested a probable lytic bone tumor. Fungal infections are rare in this region and there were no obvious draining tracts suggesting a bacterial infection.

Cleo began a treatment plan including the administration of Rimadyl and Ramaekers Veterinary Immune Tabs. Surgical biopsy, full diagnostic blood screens and an oncology consult were declined. Cleo's owners only used the Rimadyl for 3 weeks.

12/7/02 - Cleo was reassessed approximately 3 months later and appeared to be doing very well with only mild limping. Radiographs dated 12/7/2002 revealed that the lytic lesion in the lower radius was regressing.

Follow-up:
3/15/2003 - Radiographs indicated progressive healing was taking place. Cleo was able to run at full speed and appeared in great physical condition. We continued to monitor the case and radiographs performed 8/23/2003, 1/2/2004 and 4/17/2004 all showed progressive improvements. Cleo died from unrelated causes in 2005. 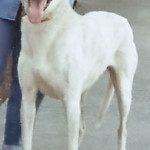 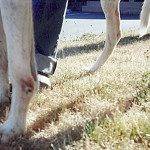 Side view of the affected limb 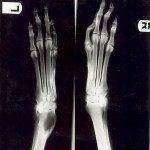 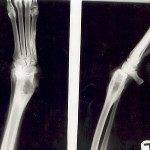 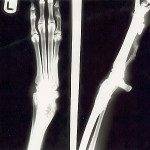 Lytic bone lesion 3/15/2003
These testimonials and case studies are presented for informational purposes only and are not intended as an endorsement of any product. The information is not intended to be a substitute for consulting your local veterinarian. Rather, they offer the reader information written by pet owners and/or veterinarians concerning animal health and products that have shown results.