History & Diagnostics:
9/23/06 - Mikey was presented to the local emergency clinic for evidence of severe back pain and inability to climb stairs. Radiographs revealed mid-spine intervertebral disc disease and avoid shaped soft tissue mass in the ventral mid-abdomen, centered slightly to the left of the midline and likely arising from the caudal body or tail of the spleen.

Blood work revealed a mildly evaluated WBC and borderline anemia.
The mass was approximately 7.5cm by 4.8cm in dimension. Wispy soft tissue streaks in the umbilical fat of the ventral abdomen also indicated that the mass was most likely hemorrhaging. An abdominal ultrasound confirmed a spleen mass and exploratory surgery was scheduled for a future date.

Follow up:
9/26/2006 - I examined Mikey 3 days later. His back symptoms were improving with the therapy prescribed by the emergency clinic. We decided to delay an exploratory for the splenic mass and started the Veterinary Immune Tabs.

10/25/2006 - Reassessment and repeat radiographs dated revealed a dramatic reduction in the volume of the splenic mass -- now approximately 3.0cm in its maximum dimension. Due to the tremendous success in shrinking the tumor, we decided to delay the surgery and continue treatment with Vet-I-Tabs. In addition, there was noted improvement with respect to the spinal disc disease.

Update:
Mikey lived another wonderful two years while on Vet-I-Tabs. The owners were very pleased. 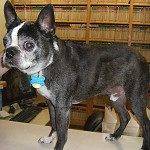 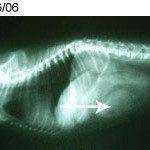 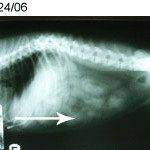