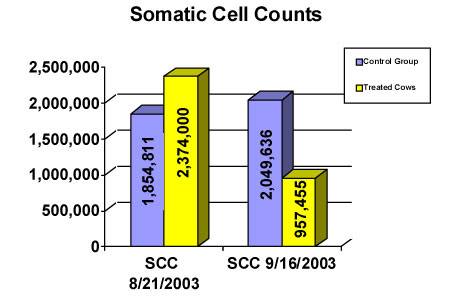 Cows in the control group received standard mastitis protocols during the 60-day time period. The study group cows received one ounce of Ramaekers Livestock Stress Stable daily for three days on and three days off. This is a total of three cycles or a total of nine treatments. Somatic Cell Count testing was again performed on 9/18/2003. The control group experienced an increase of 10.5% while the study group experienced a decrease of 59.7%. This is a 70.2% improvement in somatic cell counts over the control group.

Nine of the treated cows returned to production while only one control cow recovered after heavy medication.