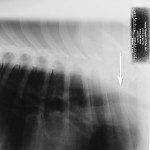 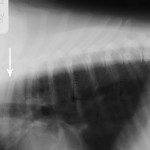 History:
Zoe had been having some nonspecific respiratory symptoms along with some loss of appetite and lethargy. Zoe had experienced significant weight loss and weighed only 63 lbs -- compared to 76 lbs the previous year.

Diagnostics:
10/25/2005 - Chest and abdominal xrays revealed a cranial mediastinum "kink" in the trachea indicative of a thoracic mass. There was also evidence of a cranial abdominal mass approximately measuring 3" by 5". Zoe also had an extremely low white blood cell count. Further diagnostics including ultrasound and biopsy were declined.

Therapy:
The treatment option the owners selected was to start high dose Veterinary Immune Tabs as an immune enhancement therapy to reduce tumor load by up-regulating the immune system.

Follow up:
Zoe's owners continued the Vet-I-Tabs but didn't schedule follow up appointments.
3/2/2006 - Zoe was reevaluated after one year of taking the Veterinary Immune Tabs. X-rays showed no evidence of the previous chest and abdominal masses. In addition, according to the owner, Zoe had gained 19 lbs in four months increasing from 63 to 82 lbs. Zoe appeared to be in excellent health with noted improvements in activity level, hair coat and eye appearance.