History:
12/21/2007 - Riley was presented with chronic coughing, anorexia and listlessness. Initial radiographs revealed severe pneumonia with fluid lines and consolidation of the accessory lung lobe and evidence of a mass or enlarged lesion in the caudal dorsal lung field. Initial oral antibiotic therapy was started. 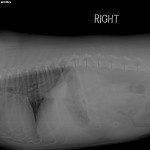 Riley Xray 04/21/2008
These testimonials and case studies are presented for informational purposes only and are not intended as an endorsement of any product. The information is not intended to be a substitute for consulting your local veterinarian. Rather, they offer the reader information written by pet owners and/or veterinarians concerning animal health and products that have shown results.